What I’m about to say will probably astonish you….

I often wondered how many of these guys would be able to write multiple articles every day and release new information and training products almost monthly!

Well on my travel to the USA I was able to find out why and how they did this…..

Many of these internet gurus didn’t actually have any clients. When I arranged to meet with them at their facility, watch them coach and pay them for their time they had to come clean…..and admit to the scam!

Unfortunately for you, there is no way of actually knowing that. Having travelled extensively around the globe meeting with and talking with numerous coaches I know who actually trains people and who doesn’t.

The only guys I’m interested in listening to are the guys that actually make a living (yes that means their success depends upon getting results) from training people and getting results!

One colleague that actually lived up to expectations was Joe Defranco, when I met with him at his New Jersey facility he was doing just that-barking instructions and coaching athletes. So obviously I respect his opinion and what he has to say regarding training. He writes about what he actually does with his athletes not stuff he makes up to impress people!

I visited Joe D on my trip to the USA and saw him training athletes, not writing bloody articles! 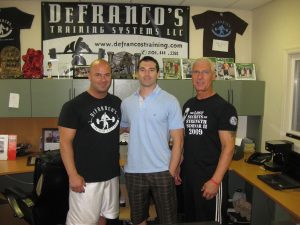 Below is an article Joe put on his website about Internet Coaches!

For the past 5 years, I’ve been in my own little world – I’ve been totally engrossed in training my athletes and growing my business. I haven’t spent too much time worrying about what goes on in the “fitness industry”. But, for some reason, I spent a little extra time “surfing the web” this past week and I must say that certain things disgusted me! Because of this, I need to get some stuff off my chest! Here we go…

Authors posing as strength coaches
If someone writes a dozen articles a month on training, they’re not a strength coach – they’re an author. There’s a big difference. If I’m an athlete, I want to be trained by a strength coach that spends most of his day in the gym — not an author that spends most of his day behind the computer. After you’ve trained athletes for at least 12-15 years, you can start writing more than training. Until that time, get your ass in the gym and train so you will have something real to write about!

Training debates
When I was in school, nerds were on the debate team. Apparently, those nerds are now in the strength & conditioning field. I’m going to let you in on a little secret — Debating never changes anyone’s mind, regardless of the topic! If you put a hardcore Republican and a hardcore Democrat in a room for a debate, do you really think that one of them would be able to convert the other? Of course not!! The same holds true in the strength & conditioning field.

For example, if you put an Olympic weightlifting coach in the same room with a powerlifter, neither one of them are going to change each other’s mind! Do you think if Louie Simmons had to attend a H.I.T seminar, he would leave with a new outlook on strength training?! Hopefully you get my point? Save yourself valuable time and energy by surrounding yourself with “like-minded” people and learn/exchange ideas with them.

The term “functional training”
I’ve talked about this one before, but it just won’t go away! For some reason, trainers that favor exercises that are performed on stability balls or wobble boards call themselves “functional” trainers. “Functional” trainers also favor light band resistance and med balls instead of heavy barbells and dumbbells. Somehow they have come up with the notion that kneeling on a stability ball while having a pass with a light medicine ball is more “functional” than squatting, dragging a sled, bench-pressing, rowing, strongman training, etc. You don’t need to be a “fitness professional” to realize how illogical this type of thinking is.

“Functional” trainers are the types of trainers that will say a bench press isn’t functional for athletes because athletes never lie on their backs on the athletic field and push a barbell off their chest. But, can someone please explain to me what sport requires an athlete to kneel or stand on a giant beach ball or wobble board? Aren’t most sports played on the fuc#ing ground!? In all of sports, it is the athlete that moves while the playing surface remains still. True “functional” training should consist of applying resistance to an athlete while his/her feet are in contact with the ground. The athlete must then adapt to these forces. This is how true strength is built.

If you’re always performing exercises on “unstable” devices, you will be limited in the amount of weight you can use. This, in turn, will prevent you from overloading the prime movers of the exercise, which will limit how strong you can get.

Bottom line – stability balls and wobble boards are training tools that can be used occasionally in the training of athletes. If they are the centerpiece of your program, my athletes will continue to kick your athlete’s asses!

Internet “trolls”
Internet “trolls” are people who hide behind their computer, make up fake names for themselves and criticize others. Oh yeah, these same people usually have horrible physiques and below average strength – and they’ve never trained an athlete in their life! Yet, they seem to know it all when they’re in the comfort of their home…or should I say the comfort of their parent’s basement!

You know the types – these are the people who comment on squat videos because an athlete may have squatted slightly above parallel; or they critique an athlete for performing trap bar deadlifts because “real men do straight bar deads”…blah, blah, blah.

The irony of the internet “troll” is that they sit behind their computer and critique people who are actually in the gym training!! Get off the friggin’ computer and go to the gym! You know who you are.

Coaches that down-play strength
It seems as if many coaches have recently started down-playing the role of strength training for athletes. These coaches will say that “athletes only need a certain level of strength — once optimal strength is achieved, future strength gains may be counter-productive to their sport.” Guess what? I agree with that statement! BUT, how many athletes have walked into your weight room possessing optimal strength? I can tell you in my 10 years of experience, two athletes have joined my program that were “strong enough.” The moral of the story is the majority of athletes that you’re going to train are weak! Get them stronger and everything else they do will become easier.

Ahhhh, I feel better after that little rant. Now that I got that off of my chest, let’s focus on something that doesn’t piss me off…hard-working athletes that bust their ass in order to achieve their goals! No gimmicks, no internet trash-talking – just setting a goal and then doing whatever it takes to accomplish it!