Standing on the shoulders of giants

Standing On The Shoulders Of Giants Famously uttered by Sir Isaac Newton, “If I can see further than anyone else, it is only because I am standing on the shoulders of giants.” What Newton meant was simply by taking advantage of all those that had made discoveries prior he was able to accelerate his own personal progress at an exponential rate.

Since I began my coaching career many years ago, I adopted his philosophy. In that I have sought out world class experts; real world coaches, physiotherapists, sport psychologists, speed coaches, rehab specialists, functional medicine doctors, nutritionists that have had a proven track record of success with the athletes they were working with to accelerate my own coaching professional development. 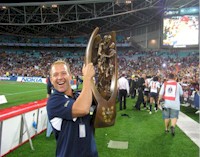 This journey has led me to travel to every state in Australia and almost every continent around the world. I am deeply indebted to those coaches that took the time to pass on their knowledge and wisdom and for that I am eternally grateful.

Check out the link below to see who has had the biggest impact upon my strength and conditioning career to date. http://goo.gl/5C88SC

If you’ve ever dreamed about becoming a world class coach or trainer, I recommend you stand on the shoulders of giants to accelerate your coaching ability and results. If you want to learn from world class experts check out the link below: http://goo.gl/JU5RGm