As far as we are aware this is the only lumbar jack in Australia. The LumberJack device is the invention of Canadian Olympic weightlifting coach Pierre Roy, who devised it for training the posterior muscles in a manner unique from the Olympic lifts.  My colleague Charles Poliquin first introduced me to the Lumber Jack in 2005.

While the LumberJack is combination of a pull-through/power snatch and provides
for a greater range of motion in which the posterior chain is activated.  Due to the neutral hammer grip hand position some athletes find it easier to incorporate into their training than traditional Olympic lifts as a hip extension exercise. 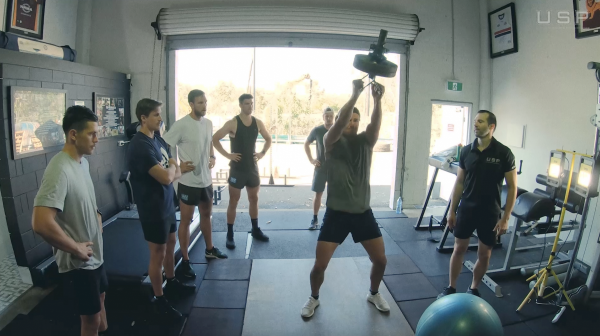 Is the lumbar Jack simply a Kettlebell Swing?

The most frequently asked question concerning execution of the LumberJack exercise is “Isn’t that just a kettlebell swing?”  Short answer: NO.

• The LumberJack exercise is not a “swing,” but a combo move consisting of an explosive pull-through with a snatch towards the end of the concentric range of motion.

• While a kettlebell swing utilizes a rotatory motion throughout its entire range of motion, the LumberJack employs a sudden drop of the hips towards the end of the concentric portion of the exercise.

• The V-shaped handle of the LumberJack allows for  a “sternum-up” position, optimizing  shoulder and thoracic spine mechanics.

• I have utilized loads up to 55kgs on my LumberJack. Its easy-on, easy-off design, facilitates loading, especially when used with a group of athletes with varying strength levels.

And if the best coaches in the world use it to develop their athlete’s explosive strength, shouldn’t you?