The tale of 2 Gold Coast Drafted Footballers…Journey from THE USP PIT Gymnasium to the Gold Coast Suns AFL Club!

Awesome to see current and former USP Athletes and Strongman Camp Members Brayden Crossley and Connor Nutting selected on Friday night and very unlucky for Harry Simington who I know is a resilient young man and will not let a minor setback hold him back from achieving his dream! Having seen their growth and development as athletes and men. I’m so proud of how far these young men have come! Their work ethic and relentless pursuit of excellence has and will hold them in great stead for successful careers at the elite level!

Very few people know the background stories and as I’ve told many of the young athletes in our program everyone has setbacks! These guys are no exception.

To read more about their stories click the link here…My PA Jess went through our photo files and came across a few rippers for when these guys were super young, working hard at our USP PIT Gymnasium-these pictures and vision alone are worth there weight in gold!!! 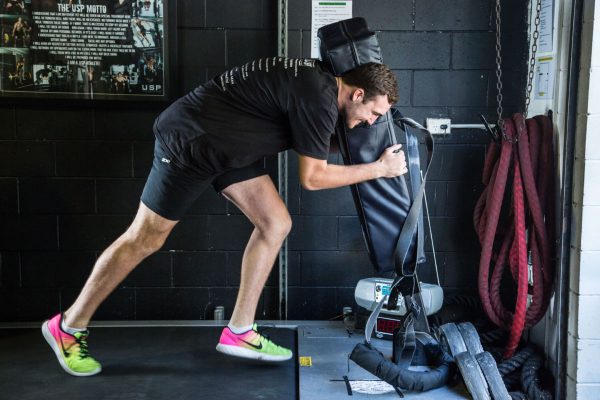 Brayden Crossley Working on his leg drive and tackling on the tredsled at USP PIT Gymnasium!

I remember seeing this kid walking around the Southport sharks change rooms with a massive footy jersey that was his dads the Southport Sharks Team of the Century Player Troy “Tusksa” Crossley. That was the first time I laid eyes on Brayden Crossley when I was playing footy back at the sharks in 2002 or 2003? Fast forward another 10 years and I once again ran into Brayden Crossley although this time he stood around 198cm tall and weighed 108kgs when he was attending PBC High school as part of their sports excellence program. He was a beast of a kid but was extremely weak. He struggled to do a single push up and his core stability was atrocious. 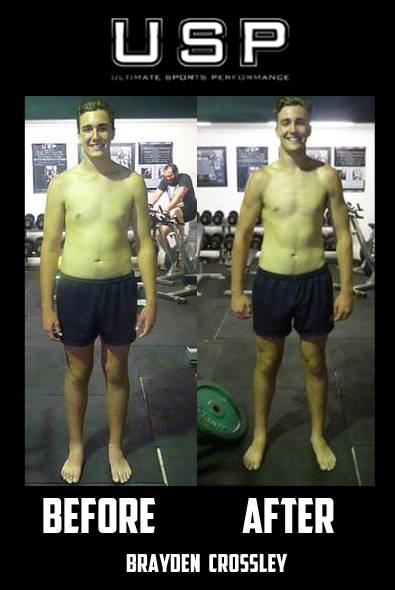 Although not the most athletically gifted the kid, he had great skills, a smart footy brain, was coachable and gave 100% effort whatever he was doing. He came through for an interview at the USP PIT Gymnasium as a 15 year old with his mum Brooke as Tuska was working. We knew this kid had potential but his body composition and general lack of strength and conditioning would hold him back from being elite.

He agreed to the terms and conditions and set about transforming his diet, training both in The PIT Gymnasium and at Strongman Camp and recovery. To cut a long story short Brayden dropped 10 kilos in a little over 8 weeks. His strength to weight ratio improved and was rewarded with All Australian Selection as 16 year old. 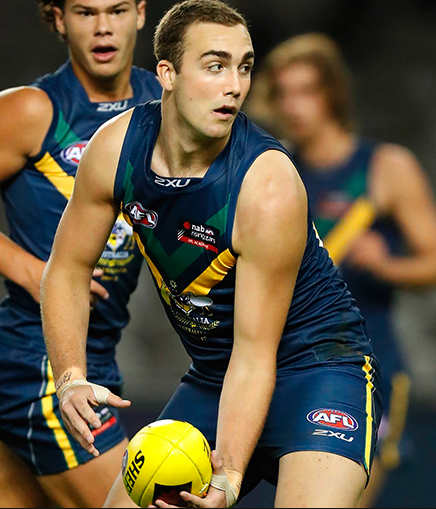 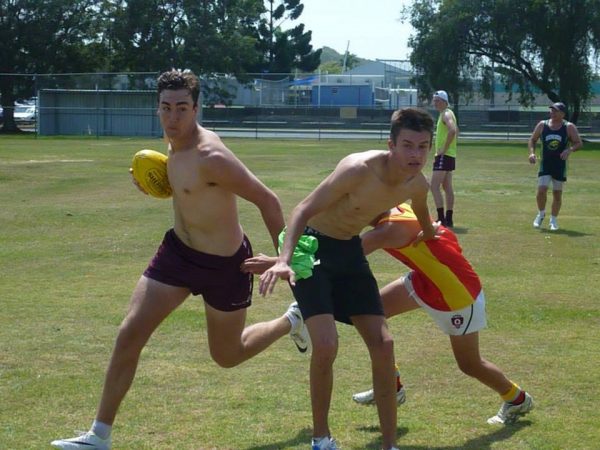 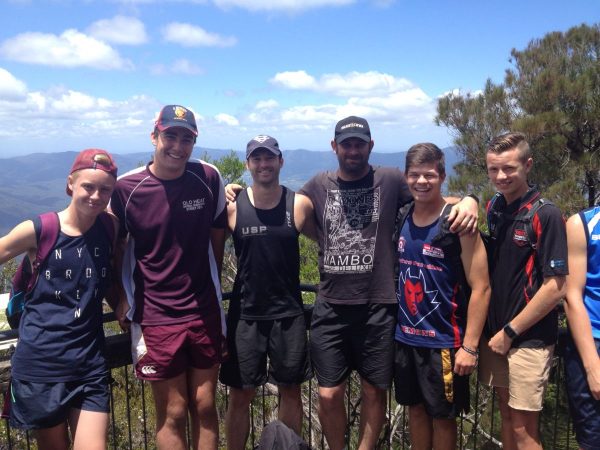 I remember standing on the Hill at the Sharks footy ground watching a state game and over-hearing a member of the crowd say-Geez that kid has leaned down and he’s a lot quicker and mobile as well. 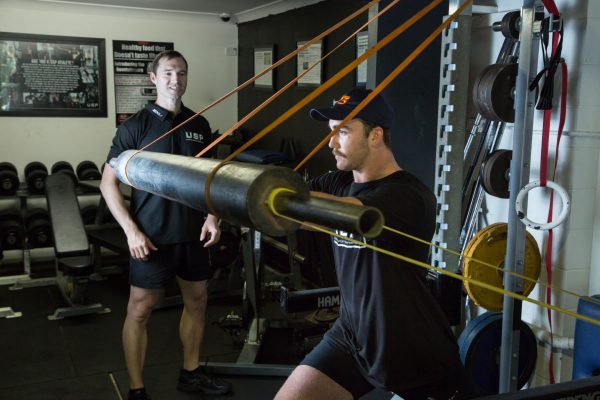 Brayden is a beast! With that much power you’d want to get out of his way!

I had a chuckle to myself and smiled and thought, you get what you deserve! He invested in himself, worked on his weaknesses and got rewarded! He overcame some solid challenges at the start of the 2017 year with an ankle injury and Glandular fever following his USA Tour with the Australian Academy Team and went on to dominate throughout the NEAFL Season until the final game-which is rare for a player under 18 as they usually burn out and haven’t got the base to keep going. Although he had a few tricks up his sleeve. 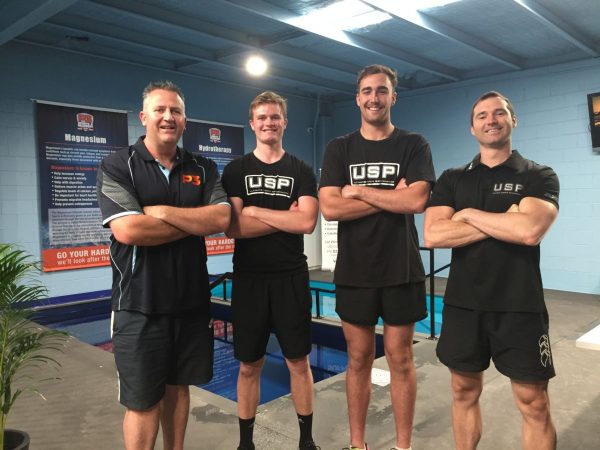 Brayden, Joey and Harry with Trav Marsham at the P3 Sports and Recovery Centre 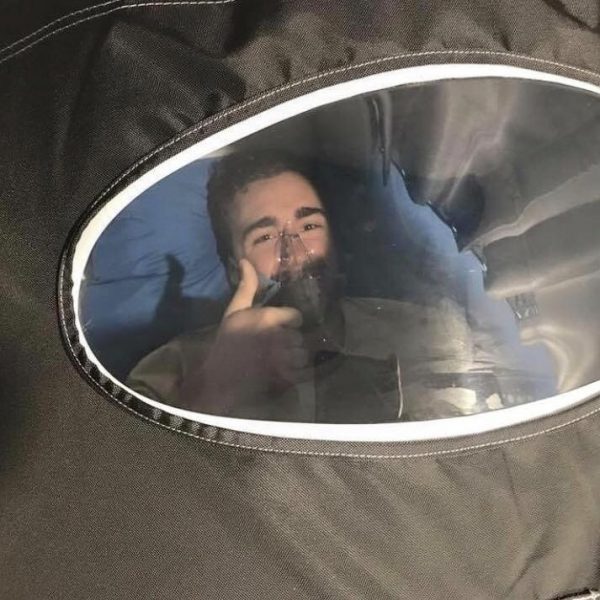 Brayden undertaking his FST sessions with Cat McNab to optimise his flexibility and mobility! 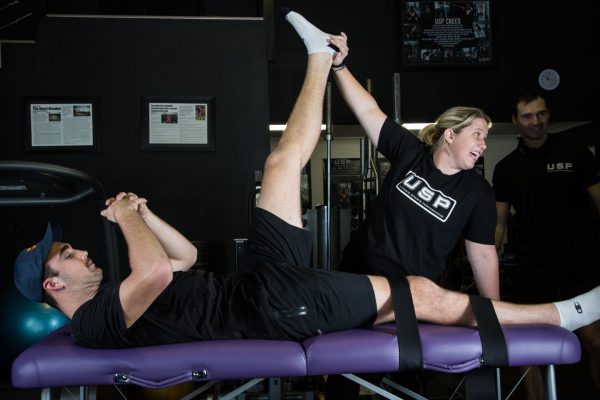 EMS and Neural Engagement Techniques Brain, Vision and functional neurology protocols to ensure the mind and body were optimised.

As a coach one of the concepts I teach my athletes is the value of gratitude and giving back to those that have helped and assisted you. These athletes embody those qualities in spades and will go a long way to their eventual success in life and on the footy field! 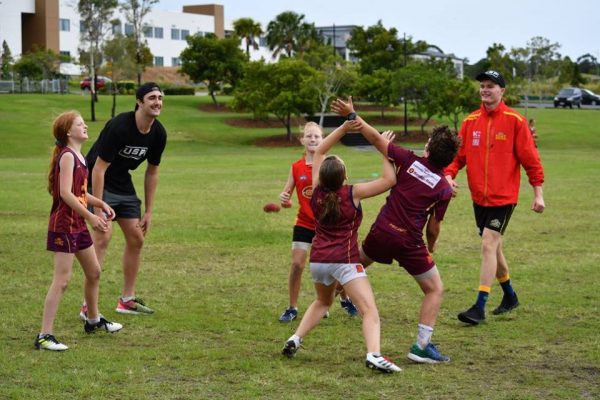 Brayden Crossley and Harry Simington giving up their time to come down to Strongman Camp November 2017 to inspire, share and pass on their wisdom and experience the USP Strongman Tribe members.

Connor Nutting-rocked up to my gym as a skinny 11 year old. His family friend Warren and uncle of AFL superstar Tom Rockliff had seen me present at an AFL Coaches course and passed my details onto Connors parents Julie and Brandt recommending that Connor come in for an interview with us. 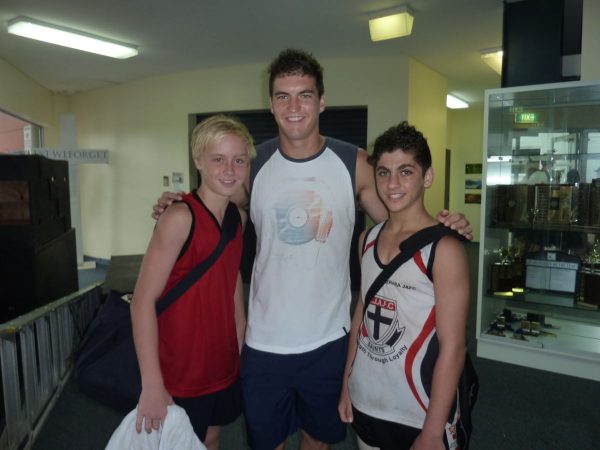 Connors father Brandt was an extremely talented basketballer in NZ and is built like a machine. 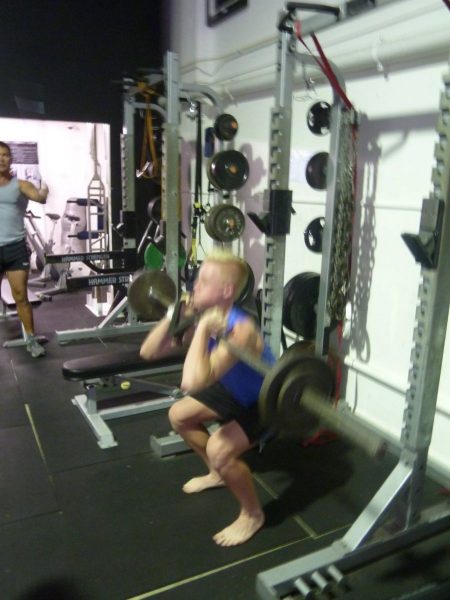 Connor Nutting working on his front squat technique at the USP PIT Gymnasium! 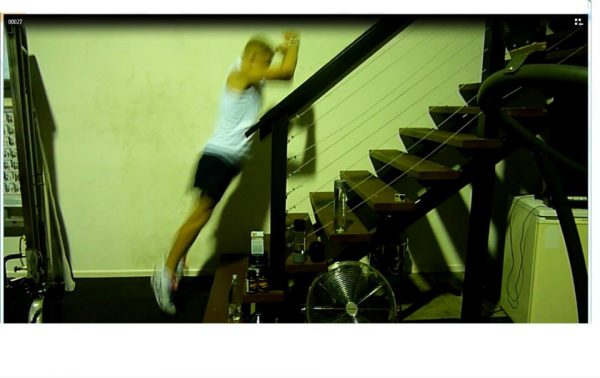 Connor like all members of his amazingly generous family were never afraid of hard work and his entire family and friends were instrumental in helping build and paint our new USP warehouse facility Gymnasium at Miami. In fact, we engaged Connor and his older sister Storms (Also a USP PIT Athlete and elite swimmers) slave labour to help us paint the facility! 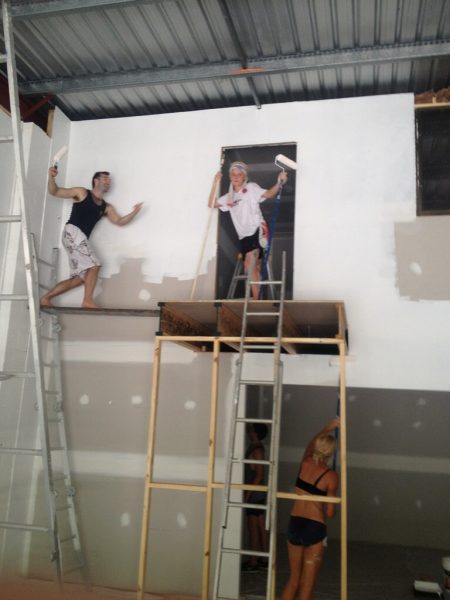 10 hours in that warehouse in the middle of summer with no electricity, no air con makes you do funny things! The USP Gym labourers celebrating the end of construction and painting!

Connor continued to work hard in THE USP PIT Gymnasium and throughout his strongman camp sessions but was never selected in a rep team until he was 15. When he was selected in the South Coast School boys Under 15 team. 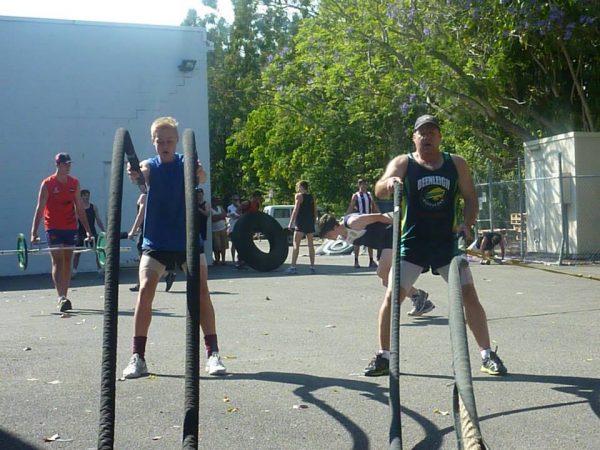 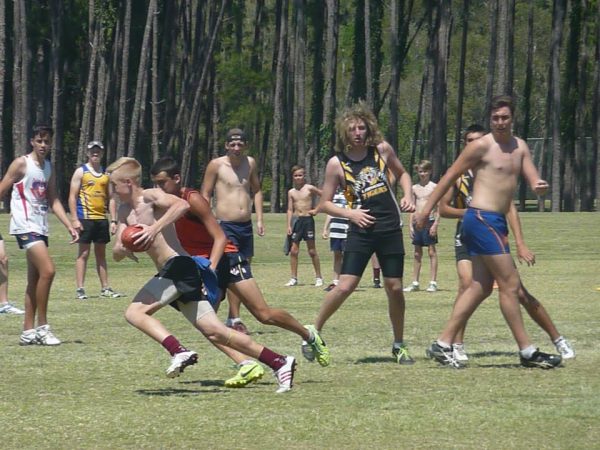 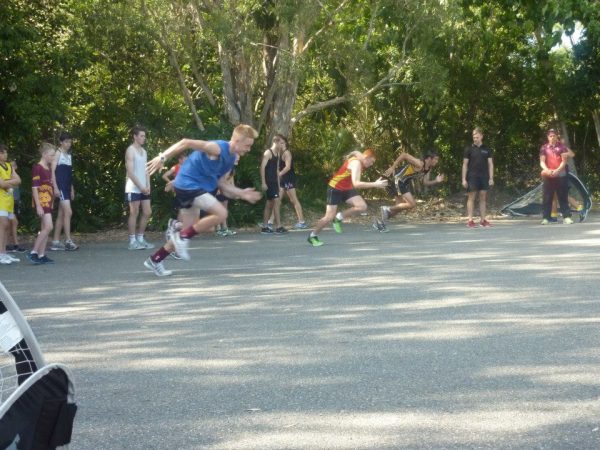 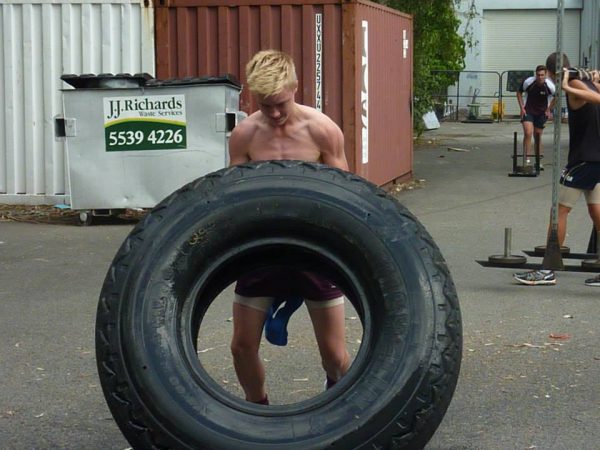 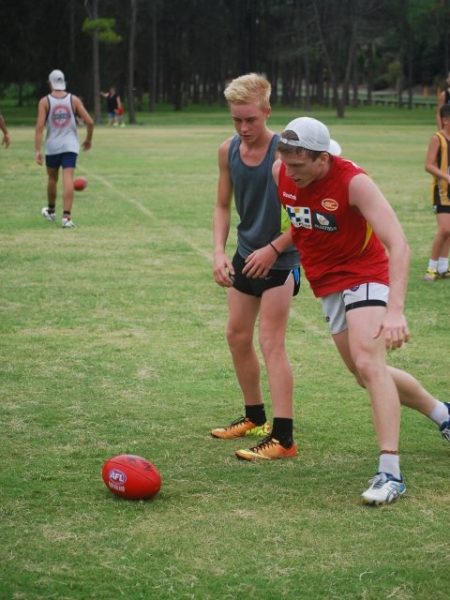 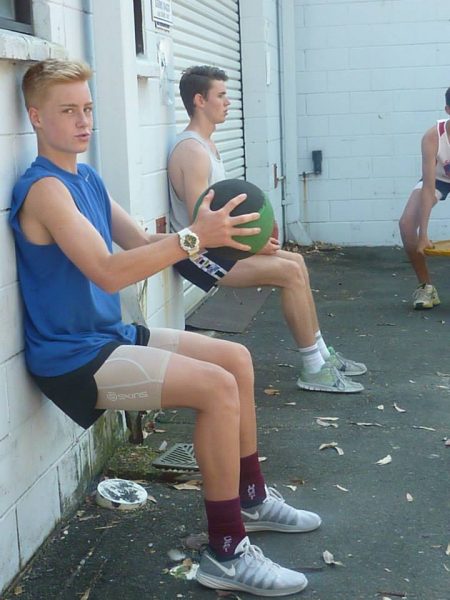 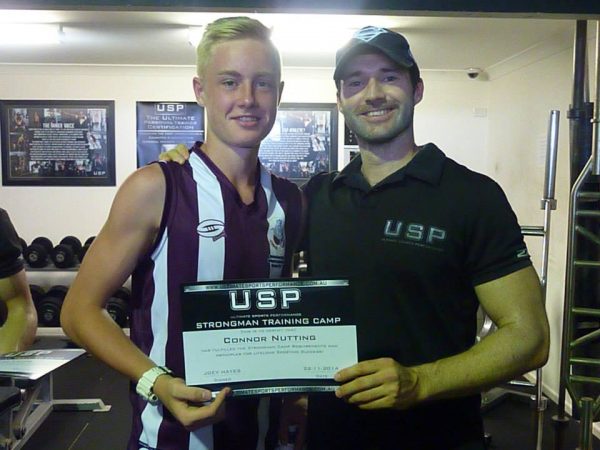 He had a solid carnival at the state titles and was selected as a shadow player for the QLD U/15 team.

I remember telling his Mum Julie, I had a feeling he would be playing in the QLD team. Fortunately for him, a member of the team was injured and Connor was selected in the State team. It’s fair to say Connor had a breakout carnival being named amongst the best players in almost every game! From the success he had at the state carnival he was then selected by the Gold Coast Suns Academy and under the tutelage of Suns academy Coach Andrew Raines furthered his football development and took it to another level. 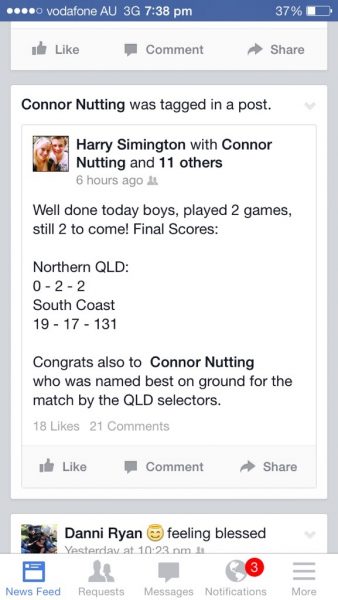 It’s a privilege to have worked with these youngsters and these athletes deserve their accolades and their rewards!

All the best for the future we look forward to seeing you at THE USP PIT Gymnasium in the off-season!