Sport Specific Training vs Training that will transfer to AFL

Often coaches and athletes attempt to replicate sports specific movements like using a weighted cable attachment tied around the ankle and swinging the leg in a kicking like manner to replicate the sports action of kicking, some surfers stand on a swiss ball and squat with the the belief that this exercise has greater transference to surfing, likewise paddling with a cable machines to reproduce the paddling movement. The research suggests that many simulated sporting movements can actually distort the athletes biomechanics when to comes to kicking, paddling or surfing which inadvertently decreases performance. 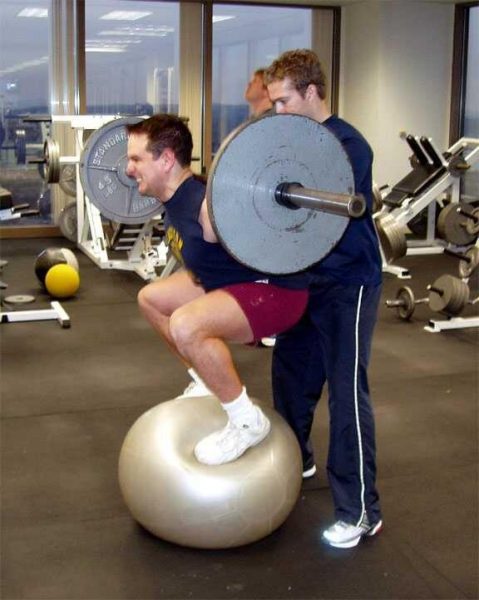 Squats on a swiss ball may look specific but the research suggests otherwise and your ACL’s may not be a fan! Source: instagram.com

The only weight training that is specific is for either olympic weight lifting or powerlifting in which the athletes are judged by the amount of weight lifted in specific exercises (3.).

The SAID principle-Specific adaptation to Imposed demands suggests that you adapt specifically to how you train….which could be a positive or a negative depending on how you train..(3.) 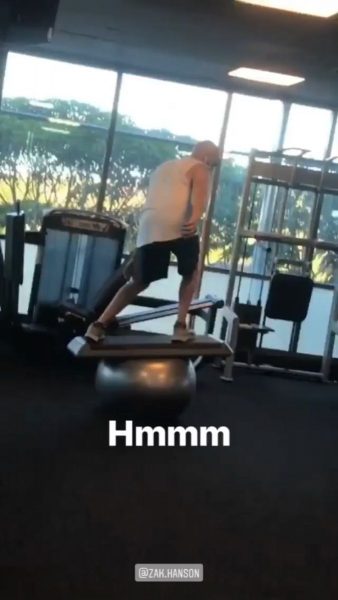 Many junior athletes and some senior athletes perform cross training in their General Preparatory Phase in the belief that the training from one sport e.g. like boxing will transfer to another sport like AFL because they are stimulating the same aerobic energy system.

Although the same energy system maybe stimulated depending on the sets, reps, rest and intensity used-the reality is that the fitness may not transfer across based on the SAID principle…(1.) 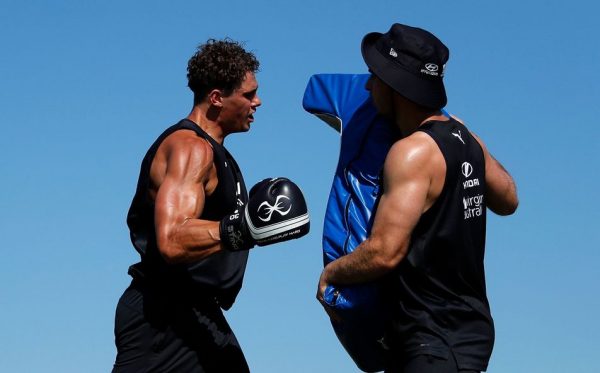 If you want to be a better footballer, my experience and results and those of my premiership winning colleagues indicates that the majority of time you want to perform training the stimulates and replicates the game.

I have written extensively about this in my skill and games based fitness articles and have implemented these drills from both junior to senior level with great success.

Skill and games based fitness 1

Skill and Games Based Fitness 2

Skill and Games Based Fitness 3

What has had little research or a concept that has not been written about is the transference of strength training to sporting performance (3.).

Yes there is a plethora of research that demonstrates that speed, size, power, strength all improve through the implementation of a strength training program…

But what is the link between these qualities and elite sporting performance?

How often is the best player on the footy team the fastest, strongest or most explosive? Often it is the players with the superior technical and tactical skills that perform the best.

In his book Transference, King quotes Basketball Player Kevin Durant on his inability to bench press or squat large numbers at the NBA Combine testing-yet he was still a superior basketball player (3.).

Click here to check out how to improve tackling regardless of strength, size, height or gender.

One of the worlds’ best and most successful Rugby League players Cam Smith is certainly not the biggest, fastest or strongest, but his ability to stay injury free and perform at an elite level cannot be questioned. (2) 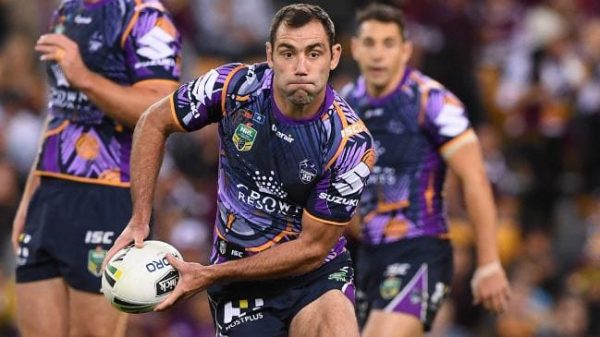 Cam Smith is not the biggest, fastest or strongest rugby league player but has achieved more success than most! Source: Getty Images

Quite often they are not-so how can that be? When all the markers indicate improvement..

The concept which has been discussed by King, I. (2018) relates to transference..

The following are tips and techniques that coaches may take into account when designing individualised training programs for athletes.

Exercise Selection-what joint angles are involved in the sports performance? What exercises are going to contribute to help alleviate muscle imbalances (Anterior vs. posterior, left vs right) brought upon by the performance of the sport? What exercises are going to assist in the prevention of injury? For example direct hamstring work for AFL footballers. Deceleration, landing biomechanics training to help prevent ankle and knee injuries.

What type of contraction does the sport involve? For example a barbell jump squat maybe a great exercise choice for a diver that utilises both and eccentric and concentric component in their sport when starting although the same exercise choice and contraction type for swimmers starting on the blocks that need to overcome a static start (3.) (in the start position that don’t use their stretch shortening cycles in this point of the race) so potentially a concentric only contraction or a squat from a dead stop in the bottom position would be more specific and potentially have more transference. 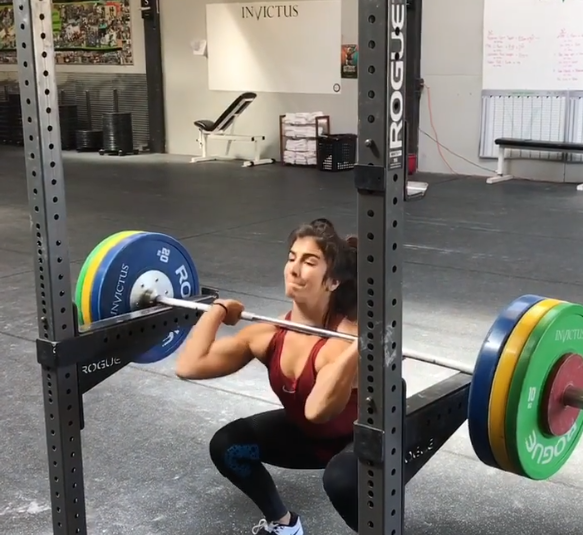 Squats from a dead stop position negate the stretch shortening cycle and allow for a concentric only contraction. Source instagram.com

Body and limb position-foot angle during squats or deadlifts, wide vs narrow grip on a bench press. A low bar wide stance powerlifting back squat or a wide grip bench press-may transfer best for powerlifting, but may not have have the same transference onto the field when the limb position is different (3.). 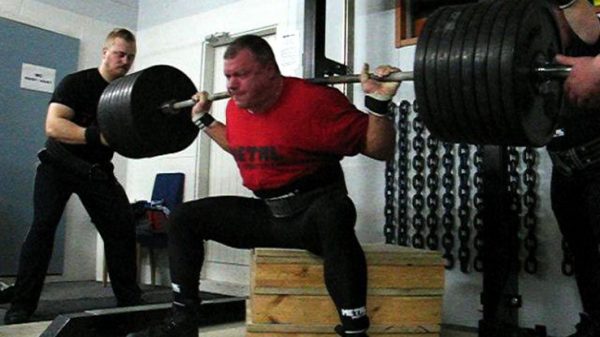 Box Squatting with wide stance with a weight belt on during all strength training sessions may no the optimal for transference onto the sporting arena. Source: Elitefts.com

What personal equipment is used-gloves, squat and bench suits, wrist wraps, elbow wraps, knee wraps, weightlifting belts? May assist an athlete with maximal strength lifts but using gloves and belts all of the time could become a limiting factor for an athlete that needs to express grip strength/forearms strength in the arena without the use of these pieces of equipment (3.).

Tempo or speed of movement. Depending on the goal various tempos can be used to build muscle, develop power and improve joint stability and control. Although for athletes with the goal of developing strength or power….the intent is to move the bar explosively is the key. If you train slow you may potentially become slower…. 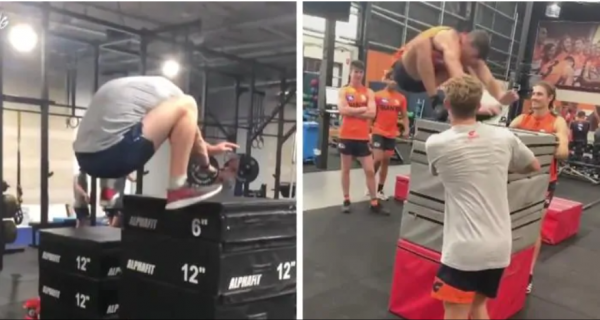 Various factors should be taken into consideration before programming Box Jumps and other plyometric exercises into a training program.

Plyometric Specificity-When implementing plyometrics you need to take into account ground contact time, limb involvement, use of purely concentric action or eccentric action and use of the arms are all variables that can all help either increase or decrease specificity (4.).

As far as strength training goes-The only specific weight training that is specific for sports is the sports of Olympic Lifting and Powerlifting where the actual weight lifted in competition determine who the winner is!