Good athletes do what’s expected, Great athletes go above and beyond and actively seek out ways to improve to get the advantage over their opposition. it was fantastic to implement revolutionary vision, co-ordination, reaction and spatial awareness training with the Strongman Tribe on Saturday.

These are the same methods we were implementing with 2018 Draft Prospects and USP Athlete and GC Suns academy Player Harry Simington and GC Suns 2017 draftee Brayden Crossley. Who were fortunate enough to work with some of our “Guns for Hire” Func Neuro specialist physio Paul Michael and Victor Popov from moving with ease.

Paul and Victor have trialled these techniques with many elite athletes including USP Athletes Richmond AFLW Player Katie Brennan and Australian Boomers basketball Rep Matt Hodgson over the past 18 months working on their Brain Function, Vision, Reaction and Co-Ordination.

The combination of visual, spatial, reaction, balance, agility, co-ordination and sport specific skill based tasks at altitude stress the brain and it’s ability to perform the skills under fatigue which potentially elicits greater skill transference and decision making into the sporting arena.

Paul Michael is one of a handful of Functional Neurology based Physios in the world. They are leading the way in vision, reaction and co-ordination training and at the forefront of neuroscience techniques to optimise performance and prevent injuries for elite athletes.

In fact, Paul and Victor were sharing these methodologies with the NRL Premiership Team The Melbourne Storm in August 2017. The techniques they are using are relatively new in Australia, but will be commonplace in 5-10 years:) Paul is based out of moving with ease physiotherapy at Robina Town Centre for more information and to contact them please go to www.movingwithease.com.au 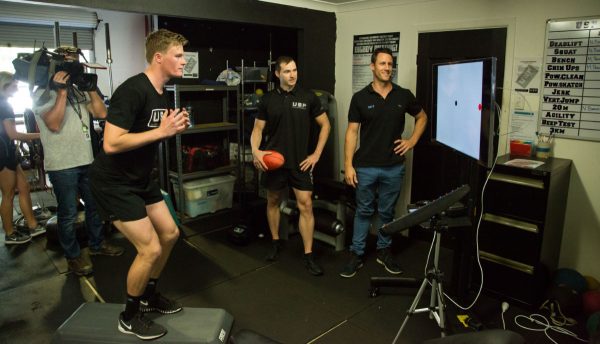 Functional Neurology is an exciting new way to train for elite performance!

What is Functional Neurology?

After all the brain controls everything!

Yet why hasn’t anybody assessed how it’s functioning and the role it plays in elite performance?

What will I learn at the Functional Neurology Assessment?

By attending the functional neurology assessment you will learn how the brain and nervous system function can be assessed via the 5 different senses.

Give me some examples of athletes with compromised brain function that may be perceived as a sports performance deficiency.

Ever seen a rugby player throw a pass or an AFL player handball the ball to what he thought was the direction of his team mate only to find his team mate was nowhere to be seen…perhaps his sense of sound and brain function is inhibited.

What about the athlete that always has pain that is not congruent with the injury. For example There pain is much worse than you’d expect given the scan and injury diagnosis…yes previously we would have thought they were soft…what if they simply to parasympathetic nervous system dominant which stimulates the IML so they are more susceptible to feeling pain?? Again a brain injury issue which can be rectified through functional neurology.

Ever seen a player constantly get run down from behind or tackled holding the ball…when he should have seen the opposition player closing in…in other words his peripheral vision has decreased…you know the issue may not be poor peripheral vision but the input the brain is receiving from the eyes due to a brain injury issue that could be identified and rectified through functional neurology treatment and assessment.

This is just the start of what functional neurology can do for athletes!!

Never before has such comprehensive in depth easy to use information been released in an easy to use format??

Functional Neurology has been used by stroke patients for years, but now for the very first time…it can be used by coaches, therapists and trainers to enhance performance and take away pain!

Functional Neurology is the Panacea for elite performance!

Check out these videos below of some functional neurology in action!

Click here to contact us to find out more and to arrange your functional neurology assessment today!